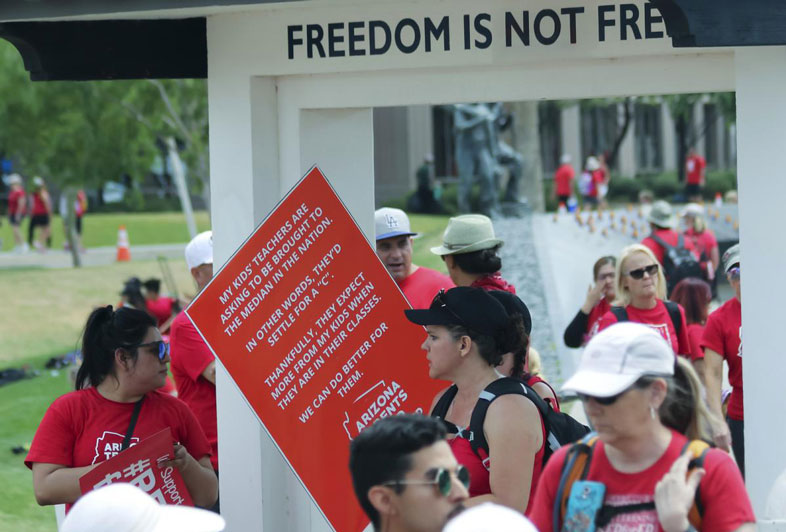 How Do Teachers’ Unions Move Forward in Wake of ‘Janus’ Decision?

When the U.S. Supreme Court issued a 5-4 ruling to prohibit public sector unions from collecting “agency” or “fair share” fees, some observers saw it as the beginning of the end for teachers unions.

In June, when the U.S. Supreme Court issued a 5-4 ruling to prohibit public sector unions from collecting “agency” or “fair share” fees, some observers saw it as the beginning of the end for teachers unions.

But such dire predictions may be premature, according to education analysts and a union leader at the Education Writers Association’s October event on the teaching profession.

Teachers unions have been anticipating a decision like Janus v. American Federation of State, County, and Municipal Employees, Council 31 for some time, Dan Montgomery, president of the Illinois Federation of Teachers, said. How unions forge ahead in a post-Janus environment is now the pressing question.

Prior to the Janus decision, unions in 21 states could collect fees from non-members to fund non-political activities that were advantageous for all employees under a union contract. Now, public sector unions are prohibited from collecting fees from employees who decline to join the union.

In 2014, the Supreme Court came close to prohibiting agency fees in Harris v. Quinn. Two years later, in Friedrichs v. the California Teachers Association, the court remanded the case to the U.S. Court of Appeals for the Ninth Circuit after a 4-4 deadlock. The Ninth Circuit’s decision maintained fair share fees at the time. Then, Janus went to the Supreme Court in early 2018.

Will Unions Decrease in Size, Influence?

Following the decision, many have wondered about the future viability of public sector unions, which without the ability to collect these fees may decrease in size and power.

By examining states that passed right-to-work laws in the years before the Janus decision, Strunk concluded that without the ability to collect agency fees, unions lose membership. In both Wisconsin, where right-to-work legislation went into effect in 2011, and Michigan, where similar legislation passed in 2013, membership dropped significantly.

In Wisconsin, membership in the National Education Association dropped by about half, according to NEA financial reports. Michigan’s NEA membership dropped by close to 20 percent.

The trends Strunk identified use data from NEA state affiliates and don’t include local union membership figures. However, it is common for a teacher who is a member of a local union to also be a member of the state union.

Revenue per teacher for the NEA also decreased sharply in both states following the passage of right-to-work legislation, Strunk said. But, as membership and money declined, Strunk said political contributions increased, unions reallocated budgets, and there was a renewed focus on elevating the teachers’ voice.

In an early sign of the potential effect of the Janus decision, a report out of The 74 indicates the NEA has lost 17,000 members and 87,000 “agency fee” payers since April, although a report from Politico indicates individual state associations report only small declines since the Supreme Court ruling.

‘A Time of Great Change’

Montgomery of the Illinois Federation of Teachers, which represents more than 100,000 teachers, described the time for his union pre-Janus as “a period of great stasis.”

Montgomery regularly sits down with union leaders and asks them about the big accomplishments of their union careers, he said. Many describe events in the 1970s and 1980s, but few mention more recent happenings. Without a “full-on right-wing attack on unions and schools,” unions often get comfortable and can settle into a rut, the Illinois leader said.

“But we are now in a time of great change,” Montgomery said.

To prepare for the Janus decision, the Illinois Federation worked to re-engage members and 99 percent of local chapters asked every member to recommit to the organization, he said.

While the Janus decision did cause a loss in revenue, membership hasn’t seen as big of a hit in Illinois. As of mid-October, Montgomery’s union had lost less than .02 percent of its membership, or about 280 individual members.

Using the common comparison of a union to both an army and a town hall, Montgomery said, “in a period of stasis or growth … you could be the army occasionally and not have to worry about the town hall too much.”

Evan Stone, the co-founder and co-CEO of Educators for Excellence, an organization that attempts to amplify the voice of teachers in policy debates, said during the EWA seminar that the topic of those town halls leaves some big questions going forward.

At a time when teachers are striking over salary and classroom conditions, some teachers may want to focus their efforts on issues that don’t have universal union support, like the school-to-prison pipeline. How union leaders address these issues is important to watch, Stone said.

This looming uncertainty is why the panelists urged reporters to not just do a one-time Janus story about the future of unions and call it quits.

“The sun is just peeking over the lake right now,” Montgomery said. “The contours and what it is going to look like with membership is going to evolve and change. The way it is right now isn’t necessarily how it is going to be in a year, or two, or three from now depending on many factors. And we are still discovering our way through it.”

Share
Author
Emily Donaldson
of The Rivard Report for EWA
Related Skills
Can Digital Classrooms Transform Teaching and Learning?
The charter school Barthelemy attends is one of a growing number of U.S. schools finding ways to make digital technology intrinsic to student learning.
How a ‘Day Without Immigrants’ Affected Schools
Schools across the country took a hit in attendance Thursday as immigrant children joined nationwide protests intended to demonstrate what life would be like without the nation’s more than 42 millio
New Poll: Public Values Career Classes, Support Services at Schools
When it comes to judging a school’s quality, what matters most?
In K-12, Children of Undocumented Immigrants Are a Growing Share of Students
Children of undocumented immigrants represent a growing share of U.S. students in kindergarten through 12th grade, a Pew Research Center analysis of American Community Survey data shows.
Learning or Teaching? Experimental High Schools Put Students First
The secret to student success may well be hidden in the buzzwords frequently used today to describe efforts to transform high school.
Load More
x