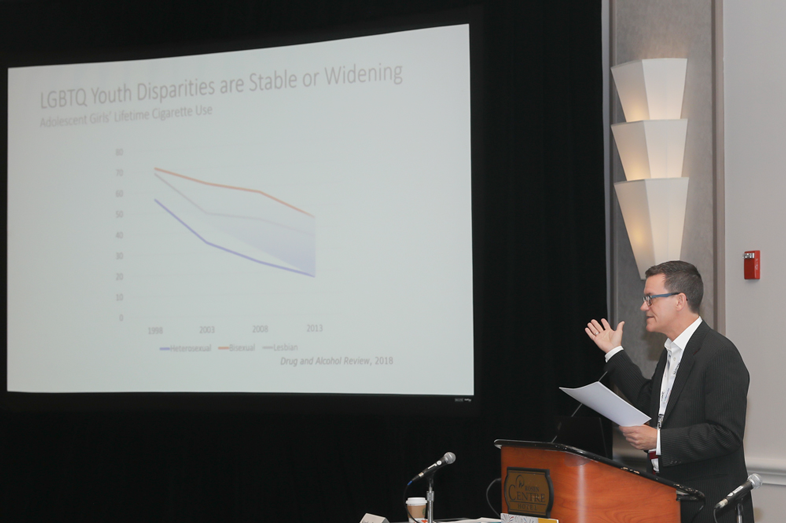 What do journalists need to know to effectively cover LGBTQ students? Those knowledgeable on the issues provide insight.

Classrooms are bearing the brunt of anti-LGBTQ sentiments surging in the U.S. How are educators and school districts responding? How do journalists go about unpacking the issues, especially when vulnerable groups – children and teenagers – are personally affected? What are the risks to sources in doing this reporting?

More than 300 pieces of anti-LGBTQ legislation have been proposed or passed in 42 states this year, more than in the last five years combined, according to Stephen Russell, department chair and professor of human development and family sciences at the University of Texas at Austin.

He was one of four panelists who discussed “The Well-Being of LGBTQ Youths” during the Education Writers Association’s 75th National Seminar on July 25 in Orlando. The panel, moderated by The 74’s Beth Hawkins, addressed the waves of state legislation and school board actions that are sparking concerns about the well-being and climate in schools for LGBTQ students, and how journalists can effectively cover the topic.

“This anti-LGBTQ focus comes after a period of decades where we believed there was substantial and cumulative – we thought, social and legal changes – for inclusion and acceptance of LGBTQ people,” Russell said. “In that context, it’s really hard to think of other society values or beliefs that change so much so quickly.”

Approach This As a Public Health Issue, Not As a Two-Sided Debate.

Researchers are concerned about health disparities widening among LGBTQ youth, Russell said. Data shows that queer kids are coming out at younger ages.

“That is a very, very big deal in human developmental terms,” he said. And a young, queer person’s life likely will be “complicated, characterized by self-consciousness and homophobia.”

Ian Siljestrom, interim director of LGBTQ rights organization Equality Florida, pointed journalists to resources,  such as the Florida Youth Risk Behavior Survey. It’s a statewide survey of Florida’s public high schools conducted in odd years to track the leading causes of death, disability and social problems among youth. (Results of the state survey can be found at the Florida Department of Health). The nationwide survey comes from the Centers for Disease Control and Prevention.

Ten-year trends data for Florida show that young people deliberately harming themselves and youths being teased because of suspected lesbian, gay, or bisexual orientation increased, according to the 2019 survey results.

Yet Florida recently dropped out of participating in the federally sponsored survey, which mental health experts and researchers call “an incredibly dangerous precedent,” according to the Orlando Sentinel. The state health department did not respond to the Sentinel’s request for department officials to explain their decision.

Connect With Teachers About LGBTQ Students, But Show Respect.

Magic City Acceptance Academy, a public charter school in Birmingham, Alabama, made national headlines for being “a haven for LGBTQ students in the heart of Alabama,” according to The New York Times.

Teachers will look to see if journalists writing about their students are respecting students’ autonomy and – and what kind of language they are using to tell their stories, according to Charity Jackson, the charter school’s chief academic officer.   This will affect how teachers help journalists connect with their students, and diversify sources – which strengthens every story.

Students are the experts of how they understand their experiences, and journalists who make space for that to come through in their stories will make the most difference for the communities they’re covering, Jackson said.

Localize Data to Elevate It.

Journalists who dig into the data – academic outcomes, health disparities, absenteeism – will find stories that resonate and help alleviate the pressure put solely on a student’s personal experience to create empathy within the reader.

If it’s not local, it is the easiest thing for people to write off,” Siljestrom said

Jackson said data helped her school navigate an onslaught of misinformation and targeted hatred from a gubernatorial candidate campaigning on divisiveness.

“(Data also) tells us where we need to go and tells us what gaps we have,” she said. “I think that is what is most powerful.”

Ask How Students Identify, and What That Means to Them.

Journalists need to make sure they ask how a student describes themself – and what that means for the student.

Zee Nadeem, a member of the University of Chicago’s Ci3 Youth Advisory Council and recent Chicago public schools graduate, asked that reporters clarify names and pronouns with students. Nadeem, uses gender-neutral (they/them) pronouns and referenced a friend who used a preferred name that their school did not recognize and the harm this caused. Bullying, microaggressions and harassment occur even at schools with policies in place to support queer-identifying students.

“The biggest thing that changed during quarantine was that a lot of people came out to their parents,” Nadeem said. “During the time after we came home from school, a lot of students were coming out in a way their schools didn’t want to address.”

Reporters who ask for guidance from the student will be well-received, and they also need to prepare for the student to not be fully able to answer every question in depth. Journalists should continue to be empathetic and transparent about what they do and don’t understand.

Explain to a Student Where the Story Is Going and What Could Happen.

Young people who are financially and emotionally dependent on their caretakers may not feel safe at home, yet they may speak with journalists who interview them at school. What is the journalist’s responsibility to help the student navigate what that means?

Be As Transparent As You’re Asking Young Sources to Be.

Florida families who affirm their children’s queer identities are facing an onslaught of public abuse. Meanwhile, teachers – straight and queer – are worried how the new law will govern their daily interactions with students, and what punishment awaits those who are supporting queer students navigating their own lives.

This creates a toxic, intensely vulnerable and possibly hostile space for journalists to navigate. Be direct with organizations you reach out to, and share previously written stories that help illustrate your current story’s angle, Siljestrom said.

Activists, families and organizers need to know journalists have the emotional language to describe the situation, and that they won’t sensationalize such fiercely personal issues for the sake of wider readerships.

“We’re never going to give advice that is not aligned with the law,” Siljestrom said of his organization. “But we also are seeing there is such a wide understanding of what (the law) means. And, so, we’ve been really honed in on trying to create clarity, trying to create calm, so that our schools can continue to operate in ways that we’re supporting every single child and their families.”

Within the tragedy, trauma and opposition, journalists still can look to capture the joyous moments of the queer people and communities they’re covering. This will help the community and the journalist.

“Thinking about ways to include the redemptive arc of the story might be a good way to signal to young people that there’s hope for everyone,” Russell said. Continuing to rewrite the story of oppression is how humanity survives, he added.

Share
Author
CD Davidson-Hiers
for EWA
Related Skills
How to Better Cover LGBTQ Students in the Pandemic Era of ‘Don’t Say Gay,’ Book Bans and Other Issues
This deep dive catches reporters up on the legislation and issues affecting LGBTQ students. Read this main story and two other related pieces to improve your coverage.
Getting Out of the Statehouse and Into the Schoolhouse When Covering LGBTQ Students
Here are 3 suggestions to better cover LGBTQ students.
A Guide to the Guides: What to Know About LGBTQ Style Guides for Journalists
There are numerous LGBTQ style guides for journalists, so here's a primer.
Responsible Reporting on LGBTQ Students
Tips for coverage of youths' mental health, well-being, and more.
Load More
x