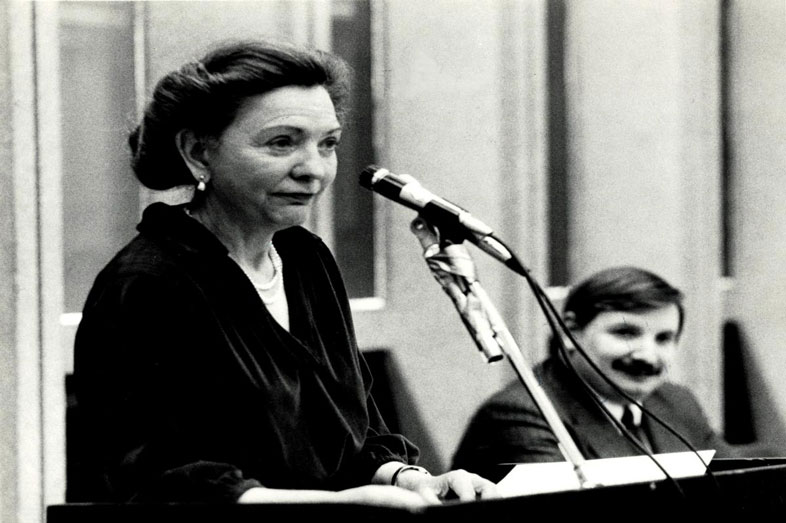 The first education secretary, former U.S. Court of Appeals Judge Shirley Hufstedler, was appointed by President Carter in the fall of 1979 and addressed EWA members the following spring.

When U.S. Secretary of Education Betsy DeVos declined EWA’s invitation to speak at its 70th National Seminar, it prompted coverage from The Associated Press, The Washington Post, and the Los Angeles Times, among others, in part because of her already limited press availability in the nearly four months since she was appointed to the cabinet post.

This year’s National Seminar kicks off Wednesday at Georgetown University in Washington, D.C. DeVos’ 10 predecessors have spoken at EWA’s conference at some point during their tenure. The first education secretary, former U.S. Court of Appeals Judge Shirley Hufstedler, was appointed by President Carter in the fall of 1979 and addressed EWA members the following spring.

Hufstedler acknowledged it was a challenging transition to being a public figure after 18 years on the bench, joking that “It is hard to remember that I cannot sustain a single objection — not even my own.” However, she pledged to be accessible, noting that “I believe the Education Department is an important story, and that people are interested in learning how this 13th seat at the cabinet table will affect their lives.”

She also promised to avoid the temptation to lecture the reporters in the room on stories they should be covering. She did offer, in exchange for a self-addressed stamped envelope, to mail her list of story ideas to anyone who wanted them. “Please remember the stamp,” Hufstedler said, in a nod to the downturn in the nation’s economy at the time. “This is not a good year for new budget items.”

More recently, several education secretaries, including John King, Arne Duncan, and Margaret Spellings, spoke at our conference during their first year in office. Below, we look back at what some prior secretaries had to say when they addressed the largest annual gathering of the nation’s education journalists.

William Bennett was appointed by President Ronald Reagan in 1981. In addition to his more political work, he authored and edited “The Children’s Book of Virtues,” which inspired a late-1990’s animated PBS Kids television series. Speaking at EWA’s event in 1988, he devoted the bulk of his speech to urging a free exchange of ideas.

“There should be no tolerance of intimidation of free speech and debate,” he said, singling out for criticism a protest by black students at the University of Massachusetts, Amherst. “Martin Luther King Jr., said protest should come after you have exhausted all other means of achieving of progress. … I’m not sure the students at the University of Massachusetts went through all those steps. If they did, it certainly was not in the accounts I read.”

(The Washington Post, reporting on the Amherst protest at the time, chose the headline “Campus Minorities Confronting Racism With Mature Methods.”)

During his EWA National Seminar appearance in 1991, Alexander laid out an education agenda that reflected how consistent his positions have been on the perceived perils of federal overreach into local decision-making on public schools.

”We can’t do what we need with orders from Washington,” he said, adding that much must be left to communities, from deciding how schools teach to setting rules for private schools that participate in a tax-supported choice program.

In 1993, President Clinton approached former South Carolina Gov. Richard Riley about a possible appointment to the U.S. Supreme Court. Riley turned him down, and the seat was ultimately filled by Ruth Bader Ginsburg. But Riley said yes to serving as the education secretary, holding the cabinet position for the entire two terms Clinton was president.

At EWA’s National Seminar in April 1993, Riley focused on Clinton’s plan to expand expectations for student knowledge, reported Laura Wisniewski of the Atlanta Journal and Constitution, citing “physics, foreign language, geometry and the arts” and greater competency in both “academics and occupational areas” as targets.

“Some of the goals will be almost impossible to reach; we know that,” Riley said. “Our task is immense and somewhat risky and the cost of failure is very, very high, but the cost of not trying is even higher.”

Former Houston schools superintendent Rod Paige was appointed by President George W. Bush in 2001 and held the post until Bush’s second inauguration. Paige spoke at the EWA seminar in 2002, months after the No Child Left Behind Act, the most sweeping overhaul of the nation’s education law in decades, had taken effect. At the time, Paige praised its bipartisan support, while promising greater transparency and accountability for the tax dollars that support public schools.

“Clearly, resources are important, but I continue to run into people who say we can spend our way out of this [low student achievement],” Paige said. “I’m frustrated that the connection between spending and performance is so intense. Who is responsible for all those expenditures without results? It is useless to spend more money if the system itself is not sound.”

Margaret Spellings followed Paige as Bush’s education secretary, speaking at EWA’s annual seminars in both 2005 and 2007. In her first appearance, Spellings was on the NCLB defensive, as the education rank and file had begun to chafe at the federal law’s design, which included singling out schools that were deemed low-performing based on the feds’ metrics. Spellings criticized the news media for fanning those flames. As Alan Richard reported for Education Week, the term “failing school” was not in the No Child Left Behind Act, “yet this anxiety-provoking term is commonly used in headlines and in the bodies of your stories,” she said. Spellings noted that the statute refers to schools “in need of improvement.”

With the election of Barack Obama, the nation got a new education secretary: the former CEO of the Chicago school district Arne Duncan, who served from 2009-2016. This was an era of big carrots — billion-dollar grant programs intended to push states to adopt policies in line with the administration’s priorities. Duncan spoke at six EWA National Seminars during his seven-year tenure, and in 2014 asked, “where’s the outrage” over the persistent achievement gap for underserved student groups. “When students of color and students with disabilities are disproportionately suspended or expelled, and when that disciplinary action stems from discriminatory policies or practices, it’s a civil rights violation,” Duncan told the audience at Vanderbilt University.

To be sure, Duncan’s invocation of education as a civil rights issue echoed prior education secretaries, including Spellings and Paige. Duncan’s successor, John King, took a similar tone last year at EWA’s 69th National Seminar at Boston University.

“There’s a new sense of urgency in the country of talking about race and class,” said King, who served in the education secretary post for the final year of the Obama administration. King contended that segregation is no accident, but rather “the result of policy choices … around schooling and around housing” and the “systematic lack of investment in high-needs communities.”

But King also had a less familiar form of discrimination to respond to: newly proposed state laws related to gender identity, including North Carolina’s plan to require students to use the bathroom that matched their sex as listed on their birth certificates.

“They are hateful laws and they should be repealed,” King said.

So what’s next? While DeVos won’t be at EWA ‘17, we welcome her participation in the future, and hope she will consider this a very early invitation to our next gathering.

As EWA Executive Director Caroline Hendrie told Politico, “The fact that we are still at the beginning of (DeVos’) tenure makes her decision to forgo this opportunity particularly disappointing. Nevertheless, we are optimistic that she will be able to join us in the future.”

In the meantime, we’ll be talking about many of these issues and much more at Georgetown University this week. Follow along on Twitter (#EWA17) and watch for live video feeds of sessions on the EWA Facebook page.

Emily Richmond
Public Editor
Photo Caption:
Shirley Hufstedler, the first U.S. Secretary of Education, speaks at EWA's National Seminar in April 1980. (EWA Archive Photo)
Related Skills
How Summer ‘School’ Will Look Different This Year
Amid pressure to address massive learning disruption, student well-being, and inequities in opportunity, how are communities using this unusual summer?
Reporter Guide: Campaign Finance
Campaign finance might seem like the exclusive province of political reporters, but there are many good reasons why you should be paying attention – both in races for education positions and in othe
What Reporters Need to Know About State Testing in 2021
With the Biden administration largely holding fast on the resumption of state assessments this year, critical questions remain on the scope of testing, as well as what can and should be done with the
U.S. Students Competitive Internationally in Math and Science
The U.S. isn’t No. 1 but it’s in the top 10: According to a respected international measure of American student performance in math and science, the nation’s 4th and 8th graders, on average, sco
The Push for More College Data, With the Challenge of Protecting Student Privacy
Students, parents and taxpayers want to know now more than ever if college is worth it.
Load More
x