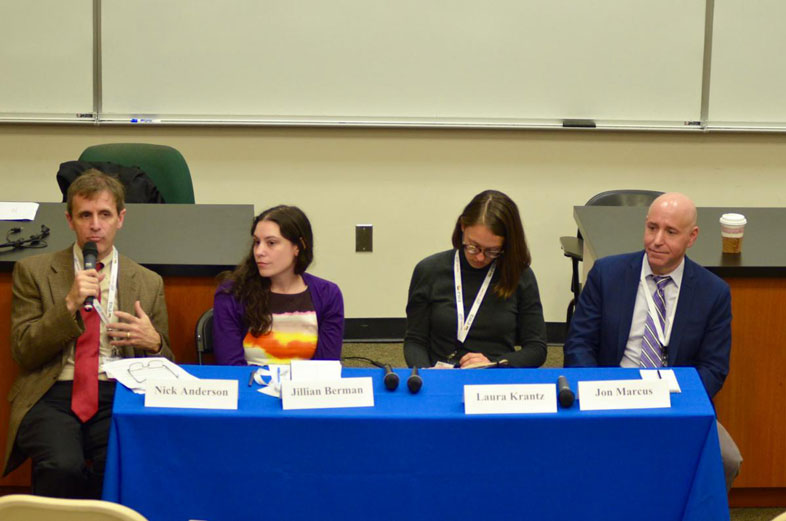 From ‘Sugar Daddies’ to College Mailboxes: Reporters Share ‘How I Did the Story’

Nick Anderson didn’t have to be asked twice to get on a train to New York City.

Nick Anderson didn’t have to be asked twice to get on a train to New York City.

A professor at Columbia University called the veteran Washington Post reporter last summer. She told him she had spoken with students who were making ends meet by engaging in the sex trade, hooking up with older men on “sugar daddy” websites.

“She asked me, ‘Would you be interested in writing about something like this?’” Anderson relayed to a room full of journalists who had assembled for a session at the Education Writers Association’s annual spring conference.

He paused for effect, his eyes widening as he peered over his glasses at the audience.

“I mean, right?” he said as the room broke into laughter, recognizing how most reporters would jump at such a story.

Anderson went to New York, but ultimately his story was not about Ivy League students having sex for money. And that was really the point he was trying to make as a speaker in a session called “How I Did the Story.” He had gone to New York for one story, but when the sex trade students were reticent to talk on the record, he found, perhaps, a better one.

He wrote instead about low-income, first-generation college students who are promised a full ride to universities like Columbia only to discover those assurances often fall far short.

“It was not the angle I went looking for,” he said, “but it was the one I found.”

Jillian Berman of MarketWatch explained how her relationship with an editor helped her to find one of her best stories.

“It came from being deeply immersed in the beat and having an editor who’s not,” Berman said.

She was accustomed to hearing that students were having trouble enrolling in the federal public-service loan forgiveness program, even when they were qualified.

“I had heard about it so much that I wasn’t that outraged, but my editors were shocked,” said Berman.

Jon Marcus of The Hechinger Report and the New England Center for Investigative Reporting said that he sometimes finds stories by taking a different approach to ones we read frequently. It has been reported for several years that college presidents’ salaries have been skyrocketing, even as institutions struggle to absorb budget cuts and students take on mounting debt. Marcus wrote about the extravagant perks and golden parachutes acquired by the presidents of Massachusetts public colleges and universities. He discovered cars, homes, country club memberships and hundreds of thousands of dollars other forms of compensations.

The reporters absorbing the advice had plenty of questions as well, mostly about how to handle the pressure of daily stories, especially those assigned by editors, while still carving out time for more in-depth stories.

Laura Krantz’s editor-in-chief at the Boston Globe is a graduate of Bates College. “Word came down to me that we were going to write about the fact that Bates lost its mailboxes. Bates is in Maine,” she said grinning.

She decided to make the most of it, going on LinkedIn to find Bates alumni and ask if they had any stories about their mailboxes. She ended up with a touching, funny story, which also was able to show how some aspects of liberal arts college life had changed.

Reporters in the room also wanted to know when to pursue an investigation, when time and resources for so many journalists are limited.

“How do you know when to go on fishing expeditions?” one reporter asked.

“File your (Freedom of Information Act) request and then move on and write your next story,” advised Anderson. “You have to go fishing but you want to have meal planned if you don’t hook the line.”

Krantz added that checking your hunches and assumptions with people you trust could help.

“If we’re going to keep going with the analogy,” she said with a smile, “sources are what help keep you from getting lost at sea.”

Share
Author
Meredith Kolodner
The Hechinger Report
Photo Caption:
Journalists discuss their work at EWA's 70th National Seminar at Georgetown University in June 2017. From left: Nick Anderson, Washington Post; Jillian Berman, MarketWatch; Laura Krantz, The Boston Globe; and John Marcus, The Hechinger Report. (G. James for EWA)
Related Skills
EWA in the Southern Hemisphere
'Jeduca,' new association for Brazil's education journalists, kicks off
Researchers: Don’t Over-Hype ‘Grit’ As Student Success Factor
There’s been an explosion of interest in recent findings on the role of mindset and “grit” in student success. But along with this enthusiasm comes real concern by researchers.
Child Care and Early Learning During the Coronavirus Pandemic: Five Stories to Tell
The new coronavirus outbreak is sending shock waves through the nation’s K-12 and higher education systems. But how is the spread of COVID-19 affecting the littlest learners, ages 0 to 5, and the ad
Tips for Scrutinizing Data on College Value
Are college students getting the best education for their (and taxpayers’) money?
Too Many Students, Not Enough Seats
Declining enrollment and sudden growth spurts come with their own challenges. In both cases, a little foresight can go a long way.
Load More
x