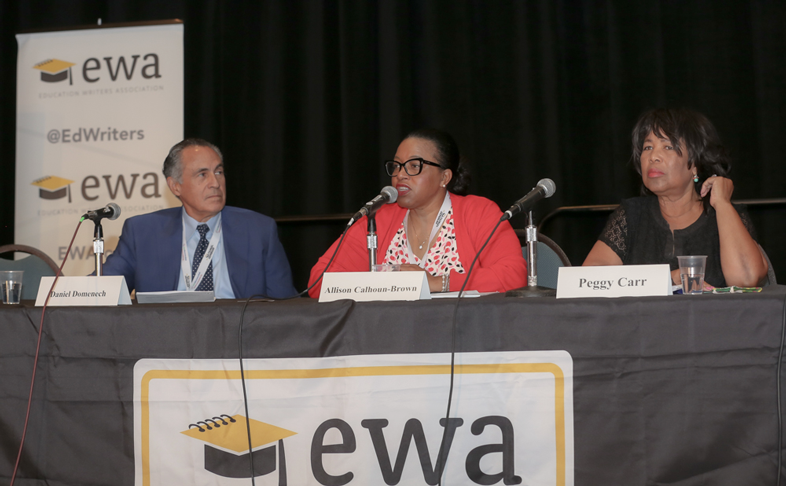 Get background, tips and story ideas for covering academic recovery, and any resulting achievement gaps, at K-12 and higher education institutions.

More than two years into the pandemic, colleges and schools are trying to help students make up for lost instructional time.

What’s ahead on the path to academic recovery? Experts offered their perspectives on what reporters should look for and be mindful of during a session at the Education Writers Association’s 2022 National Seminar.

The panel agreed that students have a lot of ground to make up because of the disruption, though all students don’t have the same distance to go.

Expect progress over the last few decades in closing achievement gaps between students of different backgrounds to be obliterated when performance on the National Assessment of Educational Progress is reported in October, said Tom Kane of the Harvard Graduate School of Education.

“High-poverty schools were actually more likely to go remote than low-poverty schools in almost every state that we looked at,” Kane said. “It was the school closures that widened the gaps.”

Racial Disparities and the Path to Recovery

The way schools resumed classes in the 2020-21 school year “were very different based on race and ethnicity,” Carr said.

White students started primarily in person, and Black and Hispanic students largely started in remote classes. The majority of Asian students were studying remotely, even at the end of that school year, Carr said. Some of this was based on parent choice, but not always.

The recovery will be expensive, Kane said. Be wary of districts taking the federal rules on American Rescue Plan dollars — 20% of pandemic aid — literally. “It’s not going to be enough,” Kane said. “We’re not going to be able to do it more cheaply than a regular school year.”

Specifically, he said, the high-poverty districts that were remote for more than half a year likely would have to spend close to all their federal aid on catching students up.

And while rapid recovery is possible for some students, depending on whether the interventions districts choose are sufficient, there’s a timeline for spending their share of American Rescue Plan money — about $189 billion — by summer 2023.

But Domenech said that could change.

“We’re working right now with [Education Secretary Miguel Cardona] to try and expand that,” Domenech said. An extension could give schools until 2026 to spend the money, which may be especially important for any plans related to construction and other school infrastructure.

Examine Test Results, ‘But Be Wary’

A trove of data will emerge from NCES in the coming weeks and months, Carr said.

“This pandemic has been like an earthquake, and education will never be the same,” she said.

While NCES shed some of the testing it would do in a typical year because of remote teaching, the organization also gathered information it never did previously. “We had to pivot and create data collections we’ve never done before.”

Other test results from states also are coming down the pike, but be wary, Carr said.

“States are all on different units of measurement. Their metrics are all different. Can you believe in an isolated way what the state is telling you?” In a word, she said, “No.” Look at all the results you can get your hands on to get a more accurate picture of what’s really going on, Carr said. “It’s a system of assessments that we need to be focused on.

Many students who graduated from high school during the pandemic are entering college — and they are changed as students, Calhoun-Brown said.

While graduation rates for two- and four-year degrees are increasing, she noted a concerning trend about first-year college students’ GPAs declining, both for bachelor’s-degree candidates and those pursuing associate degrees. Whether students are taking their classes online or in person, she said, they have challenges with engagement and retention.

“I’m very concerned, in the two-year space, the kids who are missing,” she said, adding that the popular narrative is they are working at an Amazon warehouse for $25 an hour, but she said she fears that’s not necessarily the case, and many people who might have pursued a two-year credential before the pandemic may be struggling financially.  “What does this mean long term for their lives, the lives of their family?” A related concern, she said, is the long-term pipeline of students from two-year degrees into bachelor’s degree programs.

Share
Author
Nirvi Shah
for EWA
Related Skills
A Tale of Two Math Terms: An Infographic Story About When to Use Percent Change vs. Percentage-Point Change
Meanville, USA, was an average American town. Until one day, a local journalist had to figure the best way to explain how town administrators planned to spend a sudden windfall ...
Percent Change Versus Percentage-Point Change: What’s the Difference? 4 Tips for Avoiding Math Errors
Many people get 'percent change' and 'percentage-point change' confused. Use this tip sheet, featuring insights from data journalism pioneer Jennifer LaFleur, to get it right.
5 Questions for Cassandra Mensah: How Schools Can Better Support Pregnant and Parenting Teens
Cassandra Mensah of National Women’s Law Center discusses how schools can support pregnant and parenting teens in this post Roe v. Wade world.
Reporting on the Student Loan Debt Crisis? Here Are Insights From Experts
Experts tackle questions of fairness and the future of student loans and forgiveness.
Investigating How Politics Is Affecting Education? Here’s What to Know
Amid an ‘all-time high’ in partisan polarization in the U.S., get background and tips to better cover the politicization of education and how it affects students.
Load More
x